Where do I begin? The adventure composed by creators Andy Diggle and Luca Casalanguida that feature Ian Fleming's secret agent, or rather as some others call 'Super-Spy', James Bond in what appears to be aiming to become the greatest comic book in the franchise started life back in October this year that blew the readers away not only with the characterization of Agent 007, but the narrative it was given along with the beautiful visuals that scream pure artery that leads one to a jaw-dropping experience. James Bond 007: Hammerhead puts the British agent in pursuit of a radical anti-capitalist tending to spread anarchy by taking control of the United Kingdom's newly manufactured nuclear arsenal and use it against its own.

The first two issues, I'm debriefing this since they weren't reported on this blog, dealt with Bond directly tracking down the mysterious aforementioned figure known as Kraken, from Peru to Dubai, where he had to rendezvous with the daughter of weapons industrialist, Victoria Hunt, whose father governs Britain's leading arms manufacturer named after himself, 'Hunt Engineering'. However, non-stop game of cat and mouse has been present ever since the first panel as 007 leads up to foil the plans of the villain tending to spread anarchy and bring it on the doorsteps of international security, while Hunt Engineering placed their latest innovation, a highly advanced railgun called "Hammerhead" in exhibition at the infamous Dubai Arms Fair.

As we advance throughout the miniseries, and a few misfortunes to witness, Bond is on assumption that this is just another day in the office for him and a straightforward assignment as usual, only to discover that things are not what they seem to be. Lord Hunt is attacked, mercenaries from across the globe discreetly hired to put down not only 007 but the key members to the arms manufacturing industries. We're still not given a full disclosure on the pacing of the story and the mysteries behind it, but the grim reaper with death is always waiting on the doorsteps. And of course, we're not without the most iconic line to be ever spoken in a motion picture, which I am sure everyone knows what is being referred to here, yes? Indubitably you do!

Now, debriefing Issue #3 with little to no spoilers to present. The more we delve into the story with each comic issue in hand, the more it gets exciting for any Bond fan who himself is a die-hard admirer of the Classic Bond entries where gadgets were exploited, style was presented, megalomaniac villains playing part of the high society, lovely ladies to be found around, and at last but not least James Bond at his best, dressed in neatly tailored suits and dinner jackets, making grand entrance effortlessly where you could hear the jazzy James Bond Theme playing in your mind. Hammerhead is that kind of James Bond experience.

Now, straight after the assault that occurred at a formal cocktail party back in Dubai, Bond escorts Victoria Hunt back to safety and the two enjoy a great deal of romance with one another while having a pleasant flight. However, the real problem lies in the hands of Kraken who unexpectedly shoots down a Royal Navy helicopter at the Outer Hebrides, off the westcoast of mainland Scotland, containing very deadly warheads which the villain has plans for. Upon learning this, Victoria hesitatingly drops Bond where his trail led him to relocate at, and departs back to London to prepare for an inquiry following a misfortune that occurred in Dubai.

Given a gadget-laden Ford Mustang type of a car from Q-Branch, Bond races through the Yemeni deserts while tracking down his targets that sent the mercenaries to spark a shootout (see the comic panels above from Issue #2), his last stop brings him on the outskirts of a nearly-evacuated small village that looks like a fortress from the perspective of one standing outside of it. And of course, playing theatrics as always, not too different from his final encounter with Professor Dent in Dr. No, or Dryden from the reboot film, Casino Royale, he awaits the leader of the mercenaries to unveil the identity of Kraken, sitting in an armchair in his classic masculine posture, aiming a suppressed Walther P99 at his prey. 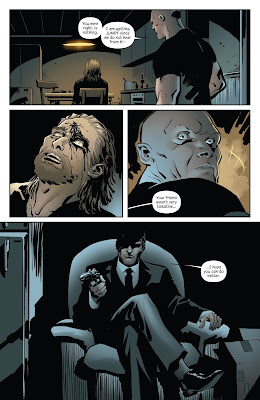 The man plays it like he's the shadow of the scythe, ready to reap the soul of the hired gunman at any moment, which he manages to do so once the latter reaches for his sidearm. And of course, the Easter Eggs for the Bond fans won't be getting away from sight easily as Andy Diggle's outstanding script and Luca Casalanguida's masterful art cultivate the visuals that seems like we're seeing a James Bond film, seeming too much like an updated tone of what the Pierce Brosnan era had delivered. A gift, I may say.

Yes, what you see above is a careless Bond cracking a one-liner joke at the face of a thug he just killed while smoking his Morlands cigarette, his original brand of tobacco of choice derived from Fleming's novels. After cracking the password on a laptop left by those whom 007 helped evolve to corpses, Bond finds out that Kraken has a buyer in hand to whom these mercenaries were to smuggle the very same warhead stolen from the Royal Navy helicopter earlier.

We all come to a surprise, however, when things turn out nasty (as Timothy Dalton would say) en route to boggle the mind of the secret agent. His car is taken over the control of via computer management which targets 007 as he leaps out of it, struggling for survival. I won't be mentioning the details in order not to spoil the entire issue for the readers, but it's something that isn't widely seen in a Bond experience before. 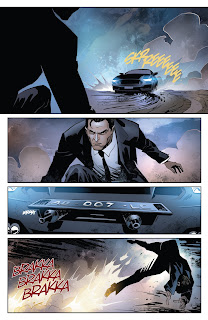 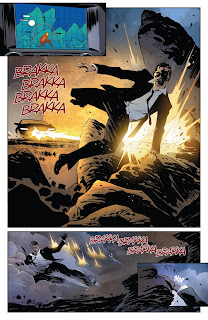 Now, how it ends I could describe with one word: Cliffhanger. And it is to say the result of the final view to the issue will most definitely leave the readers shocked. Positively shocked. It's all down to the excellent narrative conducted by the pen (or typewriter) of Andy Diggle, and the skillful art of both Luca Casalanguida and Chris Blythe that deliver outstanding visuals to life. I myself can hardly wait for the arrival of the next issue in order to find out what are the odds for our secret agent. Special thanks to Dynamite Entertainment for these wonderful set of adventures that are ought to satisfy the Bond fans in every possible way.

Thank you for reading! Feel free to discuss the topic below!
Posted by The Spyologist at 11:09 AM