It all took us by surprise, yesterday, when video game developer studios IO Interactive announced their upcoming project to be a video game concerning the origins of the world's most celebrated secret agent, James Bond, as he climbs up the ranks to earn his 00-status. A teaser announcement video debuted on both the developer's official social media channels as well as the James Bond film franchise pages.

This is all - of course - a call for celebration among Bond fans in the video gaming subdivision of the fandom as it always has been a dream to see developer IO Interactive to work on a James Bond video game, especially when their original series, Hitman, has paid several homages to Ian Fleming's super-spy for two decades since its debut release in 2000. IOI's recent two efforts in the series even doubled down on the Bondian atmosphere regarding locations, stealth, outfits, methods of tackling the missions, characters, even going as far to hiring Sean Bean, who played Alec Trevelyan in the 1995 film, GoldenEye, to provide his voice and likeness for a special antagonist in the second installment in the World of Assassination trilogy, two years ago. 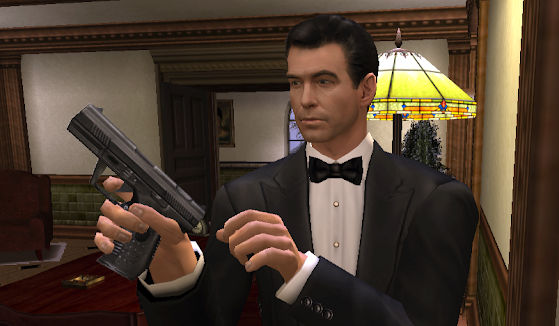 Last we've had a James Bond video game officially licensed by Danjaq (the company holding the rights to Eon Productions and the James Bond intellectual property on the screen), it was all but unfortunate effort that almost eliminated chances of seeing another entry in a video gaming form, called 007 Legends, released to commemorate the 50th anniversary of the franchise back in 2012. Of course, its poor commercial performance and inadequately realized execution led to its developer Eurocom to shut down, and Activision, the publisher of the title with exclusive rights to release video games based on the 007 property, let go of the license a couple of months later. Another albeit a less extravagant attempt to bring Bond back to video gaming form was made in 2015 on mobile phones developed by Glu Mobile, entitled World of Espionage, which was universally panned due to its uninspired content and was pulled from digital stores in a year's time.

Since then, several attempts by the fandom to bring Bond back to the video gaming format was made, including the successful Half-Life 2 conversion mod, the multiplayer game GoldenEye: Source among others. Another fan project based on Nintendo 64's GoldenEye 007 entered development in 2017, which has been ongoing for three years with positive reception from fans, aimed for release sometime in August 2022 at the time to celebrate the 20th anniversary of the film the game was based on. However, that was not meant to be, as Danjaq issued a cease and desist letter to the developers which ended plans to construct the game furthermore. The project, instead, diverted into an original title called Spies Don't Die, which is an original first-person shooter experience inspired by the aforementioned game as well as other 1990s titles from the same video game genre.

With the upcoming Bond film, No Time to Die, experiencing several delays, and adding to that it will be a long wait till the next era in the film franchise comes along with a new actor in the role of the secret agent, this video gaming experience will be a welcome change to soften the wait. At this point, development on the video game is understood to be in its very early stages, possibly having gotten past only the rough sketches to outline the game itself, IO Interactive, in its announcement description, stated that they were looking to hire elite talent from around the world to join their team. Currently, the project is only given a working title, conveniently named Project 007.

From a speculative standpoint, this upcoming video game could very well be played from third-person perspective in the style of the Hitman video games, even possibly drawing similarities between the two titles, and even probably to be developed on IO Interactive's very own Glacier engine the same as the last four Hitman titles, including the upcoming one, which is due for release on 20 January 2021. It is also entirely possible that full development on the new Bond game won't begin until Hitman III is released. We previously had third-person shooter Bond video games during both Electronic Arts and Activision's reigns – those being Tomorrow Never Dies (1999), Everything or Nothing (2004), From Russia with Love (2005), a port of Quantum of Solace (2008) on PlayStation 2 and Blood Stone (2010). Whether the video game is developed within the film universe or adopting a separate timeline of its own, featuring none of the cinematic actors who portrayed Bond before but a new one, remains to be seen. What also is intriguing is whether the origins story of Bond working his way up to 00-status will be inspired by Fleming's outline of the two-kill initiation program, or adapt the one seen in the pre-title sequence of Casino Royale (2006).

All in all, this is a very exciting news. To keep up with the official coverage, visit the official site here.

Thank you for reading! Feel free to comment on the topic below!

Posted by The Spyologist at 2:00 PM