'The Bond of The Millennium', a book covering Pierce Brosnan's James Bond adventures, is released 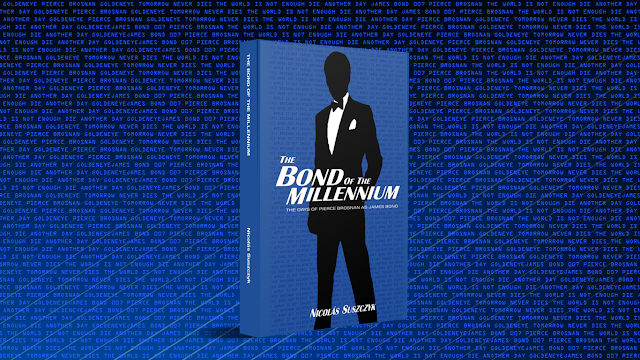 For many of us, Pierce Brosnan was our first James Bond. We loved all of his big-screen adventures long before we heard that four actors have previously portrayed the secret agent and that 16 films have preceded GoldenEye, the 1995 blockbuster that placed agent 007 once again as a popular action hero as critics thought he was no match for the modern action heroes. Nicolás Suszczyk was one of those kids that grew up with Brosnan's Bond and he dedicates this book to defend this era, making a thorough exploration of these four films by analyzing the characters and the sociopolitical background of the time in which these productions were released, much as he did with The World of GoldenEye back in June. There is also a chapter focused on the video game adaptations of the Brosnan films, particularly the three original adventures developed by Electronic Arts: 007 Racing, 007 Nightfire and Everything or Nothing. As you wait for the 25th James Bond adventure to arrive, this may be a good reading to remember such an important era in the timeless world of James Bond.

ABOUT THE BOOK
The first time Pierce Brosnan went to the cinema, aged 11, he watched a James Bond film. At the age of 27, he married a James Bond girl. He had the chance of playing James Bond himself at the age of 33 but lost the role due to contractual obligations. He was 41 when he was formally announced as the fifth actor to play James Bond on June 8, 1994, playing the role for a decade in four productions and three original video games. One could say that it was written that at some point of his life Brosnan would play Ian Fleming’s secret agent, and this happened during a particular time where the world was going through many cultural, technological and political changes.

Featuring interviews with stunt performers Sarah Donohue (The World Is Not Enough) and Jean Pierre-Goy (Tomorrow Never Dies), actor Daz Crawford (The World Is Not Enough), screenwriter Danny Bilson (007 Nightfire, Everything or Nothing) and percussionist Pete Lockett (Tomorrow Never Dies, The World Is Not Enough, Die Another Day), among many others, this book offers an in-depth look to the era that took the franchise to new heights from the 1990s to the first years of the new millennium, remarking the importance that Pierce Brosnan’s portrayal of James Bond has had to guarantee the continued success of 007 into the 21st century.

ABOUT THE AUTHOR
Nicolás Suszczyk became a James Bond fan when he first watched GoldenEye at the age of 7 on his native Buenos Aires. As a freelance writer he has contributed in magazines like MI6 Confidential and Le Bond and sites like Ultimate Action Movie Club, From Sweden With Love, Archivo 007 and The Spy Command. He is the editor of the web sites The GoldenEye Dossier, Bond En Argentina and The Secret Agent Lair, which he co-admins with Jack Walter Christian. In 2019 he published his first book, The World of GoldenEye, also available on Amazon stores.

The Bond of The Millennium is now available on Paperback and Kindle formats on the Amazon store.
Posted by Secret Agent Lair at 12:00 PM

Email ThisBlogThis!Share to TwitterShare to FacebookShare to Pinterest
Labels: 007, die another day, goldeneye, james bond, pierce brosnan, the bond of the millennium, The World Is Not Enough, tomorrow never dies